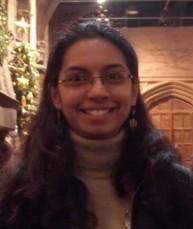 My research interests are Postcolonial Studies, Gender, and Religion in South Asia. In my doctoral research, I looked at the contemporary understandings of performance arts in India, specifically Karnatic Music and Bharatnatyam dance as ‘religious’ arts. Historically, music and dance were performed and patronized in royal courts and temples. In the early 20th century, increased nationalist activities led to ongoing self-scrutiny on what represents ‘true’ Indian culture. By appropriating colonial discourses on the religious/secular dichotomy, Karnatic Music was carefully constructed to represent a ‘pure’ Indian, specifically Hindu culture that was superior to ‘materialistic’ Western culture. Importantly, the category ‘divine’ was re-constructed and distinguished from the ‘erotic.’ In doing so, performance arts in the public sphere became gendered; feminity and masculinity were re-defined. Traditional performing communities were marginalized while newly defined music (and dance) was given to the Brahmin community who assumed the role of guardians of the newly constructed Indian-Hindu identity, resulting in caste-based ‘ownership’ of performance arts. In my thesis, I questioned the understanding of Karnatic Music and its status in contemporary Indian society by deconstructing the categories ‘religion’ and ‘secular’.

A paper based on the thesis was published recently in FocaalBlog (associated with Focaal: Journal of Global and Historical Anthropology). Other publications are listed on my website.

I am a trained Karnatic Music singer. I also make photographs and occasionally, pencil sketches. I engage with my research interests and other topics of interests (arts, gender equality, politics, social justice, etc.) on my website, and on twitter @NadadurKannan. My Academia.edu profile can be found here.